Yield curve inversion: What is it and why should you care?

When you go to your bank to start an FD, do you remember how fixed deposit interest rates vary for different periods?

Why does this happen? Well, think about it for a second.

The answer lies in the most fundamental term of banking – net interest margin!

Net interest margin is the difference between rates at which banks borrow and lend. If a bank were to borrow money from you at x%, to make a profit or margin, they need to lend the money to a third party at an interest rate of more than x%. If it can’t, it will be unable to make a profit.

Let’s bring in another aspect now – tenure of the loan!

So, lending money for a shorter period of time is less risky and hence the lender can charge only a lower interest rate.

For now, the reader should remember two things and their significance – 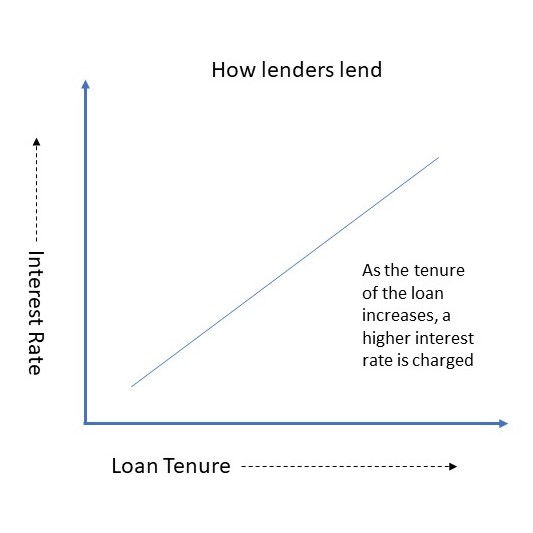 This graph is very important to our discussion.

One final pointer the reader should know about banking is how do banks make profit.

Yes, banks borrow at x% and lend at y%. If y is greater than x, the difference is the bank’s profit.

But why should y be greater than x?

Because banks borrow for the short term and lend for the long term.

This is the most basic idea behind banking. If a bank is going to borrow for 5 years (let’s say you start a 5-year FD) and lend to your friend for 5 years, there is hardly any room for profit!

Again, as someone who uses the bank to save and borrow, think about the tenures of your deposits and your loans.

For the normal functioning of banks, it is vital that the above graph holds. If it doesn’t banks can’t function. Credit will come to a standstill and the economic gears will stop rotating! Yes, that’s how serious this is!

What are debt mutual funds?

Simply said, the yield curve plots the returns you earn on the same bond across time frames.

The yield curve is influenced primarily by two factors –

For most parts, the yield curve looks very similar to the graph above. Here it is again – 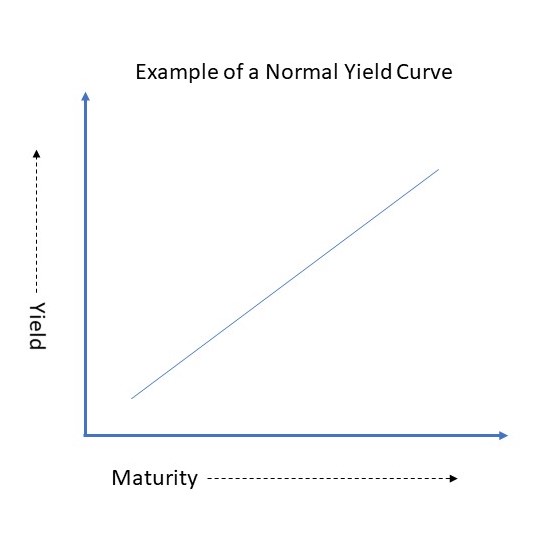 We call this a ‘normal’ yield curve.

The yield curve of government securities is the most important input for banks to set interest rates on lending and borrowing. Steepness of the yield is curve is also significant.

However, banks do consider other inputs. But these are not relevant to the yield curve inversion discussion.

What happens when you push the right end of the normal yield curve down?

You approach a flat yield curve as you can see below – 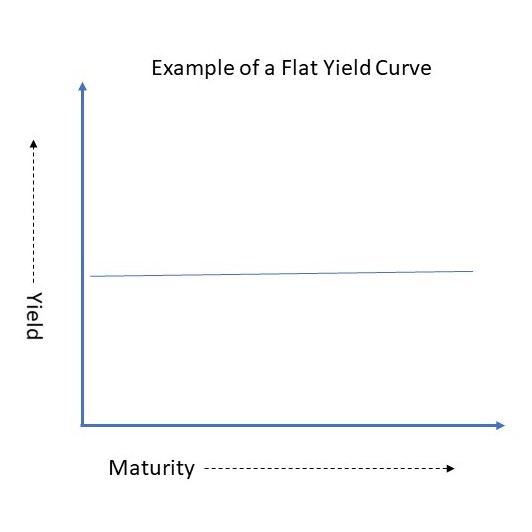 A flag yield curve means the yields on all maturities are roughly the same. You buy a 6 month government bond or a 5 year government bond, it doesn’t matter. The interest rate on both will be practically the same!

However, this is not a desired situation. Banks will not be able to profit and hence become reluctant to lend. This will slow down the economy.

The short term rates, as you may remember, are influence by the central banks. If they raise rates too quickly and the long term rates don’t move, we could get a flat curve.

The long term rates, as you  may remember, are influenced by the bond market. If they suddenly start demanding for long term bonds, that will bring the yield down.

Why could there be a sudden demand for long term bonds?

When do you make a safe deal? Generally, when you are scared of making a risky deal.

When investors start losing confidence in the market or the economic conditions, they generally flee from risky assets like equity. Where do they invest them? You’re right – government bonds!

Moral of the story: Uncertain times call for safety. Long term government bonds are the safest instruments and their demand surges during uncertain economic conditions which lowers their yield.

Now that we know how a yield curve flattens, it is really easy to understand why it may invert. 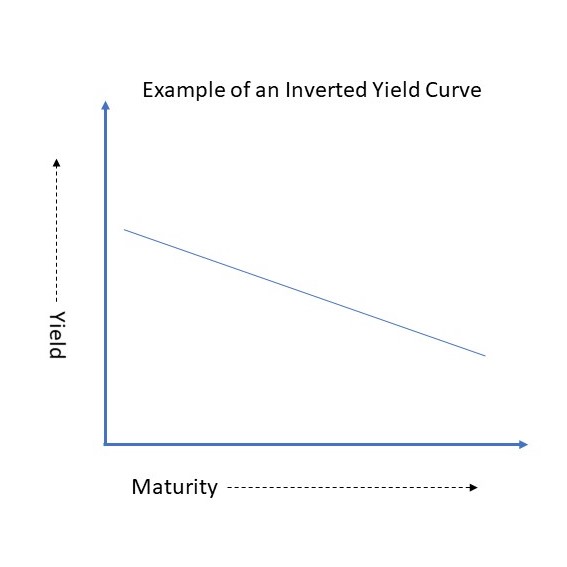 Suppose that the demand for long term bonds really shoots up. We will then reach a point where the flat yield curve will invert.

When the yield curve inverts, the short term rates are considerably higher than the long term rates! This is unusual, bizarre and undesirable!

We now clearly see why inverted yield curve is a problem. But how does one get back to the normal yield curve?

Central banks will quickly step in and normalize the yield curve by lowering the short term interest rates thereby restoring normal conditions. But this may take some time and during this time the yield curve may stay inverted.

The meat of the topic!

Now that you know what an inverted yield curve is, the logical question arises – As an investor, why should you care?

Well, you certainly must. Because an inverted yield curve is generally a sign of low confidence among investors. If the market believes in something, very often it is right!

Wait! Aren’t we talking of the USA yield curve and its inversion? Yes, we are!

I invest in the Indian markets, man. You’ve simply wasted my time! No, we haven’t!

We live in a well-connected world. If the USA sneezes, the rest of the world catches cold.

Think about 2008. The Indian economy was perfectly fine. But the sub-prime loan crisis in the USA had such far-reaching effects that Indian equities were down by 50% or more!

So, yes, even as an Indian market investor, you must care about the global scenario. Especially, the USA.

As you can see, recessions (shaded area) and yield curve inversions (blue line going below 0) appear almost next to each other.

A fair statement to make would be ‘A sustained yield curve inversion is a precursor of a recession.’ Emphasis on sustained.

That means a yield curve inversion gives you time to exit from the markets if you want to protect your money. But wait, what happens in those 15 months is something that one should not overlook!

Every time the yield curve has inverted the market has rallied! Yes, you read it right. Instead of resorting to safety after such a strong indicator shows up, the market actually bid higher and higher for stocks!

This has been observed historically time and again and can put anyone into a great predicament.

But you said sustained yield curve inversions have preceded recessions, no? The one we are talking about lasted for more than 5 months; so, it qualifies as a sustained inversion.

So, what does the most recent yield curve inversion should mean to you as an investor?

The most recent yield curve inversion was observed in 2019. The yield of 3-month treasury bills exceeding that of 10-year treasury bonds in May 2019.

The yield of 3-month treasury bills was greater than the 10-year treasury bonds for about 5 months until October 2019. This is highlighted in the following chart – 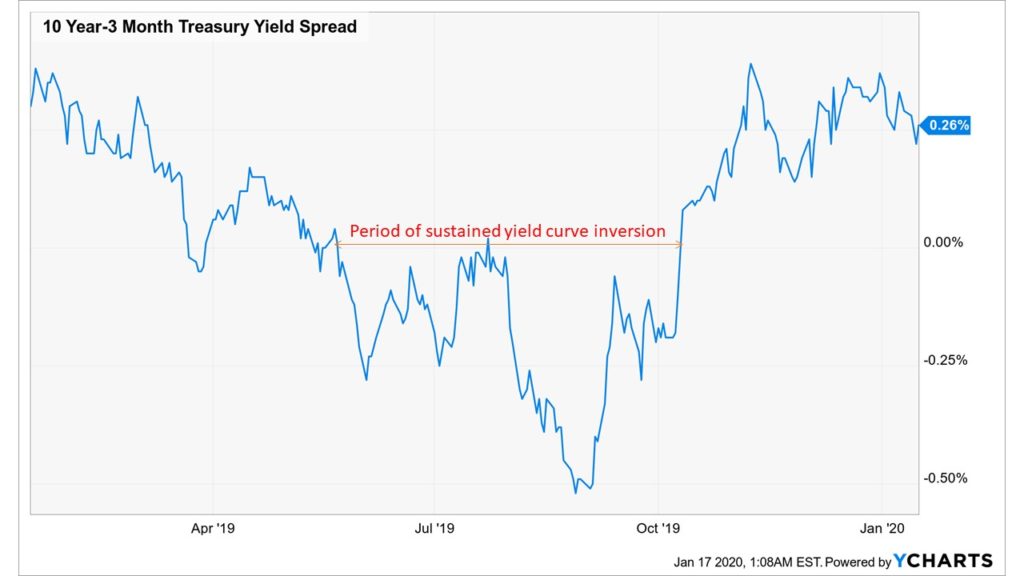 What happened next is not surprising. The Federal Reserve stepped in and started cutting rates. This had two effects –

Now, what should you do about this with regards to your investments?

Secondly, you should think of either getting out or staying in or even investing more!

PS – At Finpeg, we use the yield curve along with a multitude of indicators to guide our investors’ money in and out of bonds and equity. You can have a look at our offerings here.

Loss in Franklin Debt Mutual Funds: What should you do?

When it comes to investing money in the...
Read more

September 24, 2018 by Carter Wessman Here we go with yet another week. There will...
Read more

Happy New Year! The New Year is a chance to make some new...
Read more

Preparing to Win at Auction: What You Need to Know

For those that have attended an auction before, you’ll understand that they are...
Read more

Your RRSP is probably in better shape than you think

My colleague David Aston has just published his first book—and it’s one I...
Read more

Want to see what we bought for this week’s $70 grocery budget? I’m...
Read more

Mortgage Rate Recap and Outlook for the Week Ending January 17, 2020

Phase One of the Trade deal isn’t expected to deliver a panacea. It,...
Read more